conspiracy will be at roadburn festival thurday, friday and saturday - if you happen to be there, feel free to pass by our distro!
All of us will be there, so all orders/payments/emails will be taken care of on Monday.
Greetings!
Posted by Conspiracy Records at 11:06 PM 1 comment:

Year Of No Light - Ausserwelt preorder 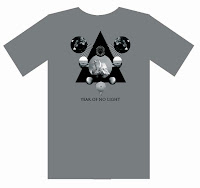 The Year of No Light 'Ausserwelt' preorder starts today. We have an exclusive preorder shirt available. Music Fear Satan will release the vinyl of the record and were so kind to offer us an exclusive brown 2xlp limited to 100 copies which will only be availble through our mailorder! Release date for this record is 26/4 and all preorders will ship around this date. Preorders on the shirt will end on 19/4 so please order before this date so we have the time to order the shirt.

Year of no Light spent most of the last 4 years spreading its enthralling psychedelic warfare to a continually growing audience. Alongside they parted ways with their singer (R.I.P) and recruited two other thirsty mercenaries. Shiran, of über-doom combo “Monarch!”, brings now his chthonian six strings to an already massive cathedral of noise and ambient drone tones. Mathieu, of deviant-electronics act “Aeroflot”, strengthens ritualistic tribal rhythm patterns.

Out of their cave, they secluded into an old theater to record these 4 tracks catching every possible vibration of the trembling frame of this enlivened a new mansion. All the energy collected at that very moment forms “Ausserwelt”, the sophomore album of Year of no Light. Mystical emanations flow out of these riffs colliding into each other to an in ear-splitting shriek. Cranked amps and molested drums hurl their mourning chant as a choir intoning its final psalms at the dawn of the Last Judgment. Year of no Light follows the path opened by “Nord” towards more somber psychedelics, creating its own blend of black metal, sludge, drone or any other influence marked with the seal of darkness.

Still no caps, no core neither stupid modern nihilism but instead an ambiguous electrical network of acting singularities, now ready to afford the collective metaphysical crash to come.
Posted by Conspiracy Records at 5:42 AM No comments:

today is the release date of the RED SPAROWES 'The Fear Is Excruciating, But Therein Lies The Answer' CD/LP.
The pre-order shirts are bound to arrive in the late afternoon, so we'll start packing and shipping all pre-orders with shirts from tomorrow on. Please be patient, we'll do our best to get these out asap, but there's a lot of you who ordered, so we'll need some time.

THANK YOU to everyone who ordered this, and for those who live in the US, check out http://www.myspace.com/redsparowes
for US tour dates!

greetings!
Posted by Conspiracy Records at 6:15 AM No comments: